“I want you to meet someone”

In 2013, I took a job in San Francisco. I was living in Minneapolis at the time, and I knew one person in the city (who referred me to the company that would employ me). One of my closest friends sent an email to me and his friend Andy that lived in the city. This email introduced us, and started a friendship that would grow into one of my favorite friendships in that city. Having just reread it, I can confidently say that nothing makes me grimace worse than reading old correspondence. Maybe. Maybe this particular correspondence is particularly uncomfortable, because of what it’s trying to accomplish. Introducing people is uncommon and difficult. But why should it be so hard?

At 142 words, the email in question can’t have been such a large time investment for our introducer, but there was unquestionably a cost to introducing us. Introductions are risky propositions, and might be insulting or flop completely, backfiring on the failing matchmaker. There is real overhead to running one’s inner simulator and trying to imagine whether your friends will get along, and it might just be that opportunities for good introduction are rare. The rarer they are, the more likely you are to stop looking for them, so even if they are genuinely scarce, many of them probably go unnoticed.

They’re worth looking for, though. You could make a great friend, an opportunity that I think we undervalue. Times of transition are natural opportunities for introduction: you’re safe to assume people are looking for new relationships. But I think introductions are scarcer than they should be. Good friendships are hard to build, so we ought to give each other all the help we can. In this post I argue that they are a specific example of a larger case of experiments we too-seldom perform, and that we ought to introduce more people. There is also a principle-agent problem at play: the introducer does not capture most of the upside when introducing two friends successfully, so they under-perform this action.

“He’s brilliant. You’re two of my favorite conversationalists, and I just discovered you both live in Brooklyn a couple miles apart. What I wouldn’t give to be there for your conversation: I have half a mind to get a plane ticket just for that.”

I’m writing this because I discovered two of my friends live near one another, and I realized I was feeling uncertain about introducing them. It’s a great opportunity…I think. That uncertainty definitely warrants more investigation.

How do you introduce yourself to new people? Given the huge diversity of people you might be meeting, it’s difficult to answer this problem in general. Your introduction depends on who you are in the context you’re introduced in, and who your audience is. Because I’m more familiar with myself than with anyone else, it seems natural that introducing someone else should be more difficult than introducing yourself. In both cases, people often revert to an unsatisfying and boring custom of asking one another “what do you do?” It seems like this should be fine. Work is a major differentiator among people, and in an ideal world, the demands of your work fit your personality well. Being defined by one’s work is offputting to some. Many people make compromises to make an income, and spend more time than they’d like to already thinking about their work. This is a poor definition of character, or at best an imperfect inquiry into someone’s interests.

There are some risks associated with introducing people. Not only do you have the general difficulty of trying to convey honestly things that are both true and interesting, but now your audience includes the friend you are introducing. When I introduce myself poorly, I have the chance to backpedal or reassess my audience. When I’m introducing someone else, the worst possible case is that I offend them and make them wonder “how did he come to think this way about me?” That’s the first level of offending someone. The second level of possible offense comes from introducing people that don’t get along. They may be insulted by the company you have chosen for them, and where usually I would compensate for this risk with compliments, every complement in an introduction can be construed as intimidation for the other party. Having a friendship arranged for you is a nervous proposition, and every endorsement I make of friend A ratchets friend B’s expectations higher. The best possible arrangement for making a friend is to have one’s expectations surpassed: I can’t make my friends meet if they don’t have high expectations for one another, but if I set them too high, they’re certain to think less of either me or themselves. So why introduce people?

The first thing that comes to mind is geography. This motivated my introduction to Andy so many years ago, and motivates the introduction I’m interested in making when I finish this post. I spend most of my time with people that are convenient for me to see. I recently moved within a mile of a good friend, and our relationship has blossomed in response. I hate to think that the main thing motivating my close relationships is physical distance: it seems like friendship should be able to overcome such insignificant things as a few minutes in a car. But it’s true! Having a good neighbor is a valuable thing, and proximity improves friendship. So for me, it’s less risky to introduce people that live near each other than to expect them to make a big sacrifice getting across town to meet.

But what do I say? Friend A is brilliant. Friend B is witty. Now each of them feels the obligation to fulfill that expectation, and there is an expectation. But maybe that’s fine. Maybe just the act of being introduced to someone is compliment enough. “I think highly of you” is not a sentiment to be thrown around lightly, and the accountability to a third-party makes it really mean something. “I think so highly of you, I’m going to endorse you to someone” is almost it, as well. But that’s not quite the sentiment: when you introduce someone to someone else, you ignore whatever pretenses we keep up to one another about busyness. I think the common claim of busyness is mostly boring (though probably true), and occasionally cowardly, and the act of introducing friends disregards this claim. If you don’t want to spend time with someone, maybe that’s the best way to tell them, indirectly and with a bit of dishonesty, but having a façade of busyness also carries, to me, a narrative of having lost control of one’s schedule. This façade is ignored, someway, by suggesting that two people meet one another. In this way, an introduction could be an insult. The subtext is “you need more people in your life,” or “you deserve this person.” Even if no one intends to insult, and being a matchmaker of friends is nothing but risky downside, this insult might be the most resonant part of your gesture. But all of this is a little ridiculous. It would be very unusual to go out of one’s way to insult someone. The only sensible message one can interpret from a friendly introduction and endorsement is a positive one. “I went out of my way to endorse you to this person I think you’ll like, and I’ve got nothing to gain from being dishonest about this.”

The Past was Probably Terrible, But…

In a time before telegraphs, visitors to a city would solicit letters of recommendation from friends to call on residents at their destination. Before hospitality was an established industry, such letters would have been an essential part of planning a trip. Now that we don’t need to impose on people to have a bed where we’re going, most of us don’t even consider inconveniencing someone on our behalf.

I can spend the money to stay in a stranger’s guest bedroom: it’s cheaper than ever to find a place to sleep. If I’m interested in something with character, I can find a diversity of experiences through AirBnB. But treating these exchanges exclusively as market transactions misses an opportunity for a deeper connection. I’m very unlikely to form a lasting relationship with my host (if we even meet), so the money I’ve spent was a purely commercial pursuit. At the risk of idealizing the past, imagine with me a world where my only option is to impose on my social network for a recommendation of a resident of my destination city. Though it would make travel much more expensive (the coordination costs are huge), and unpredictable (oops, my would-be hosts are away right now), it also sounds like a great way to meet someone. If one had the same budget for accomodations, they could buy a nice shared experience or gift for their host, and bring with them the endorsement of a mutual friend. 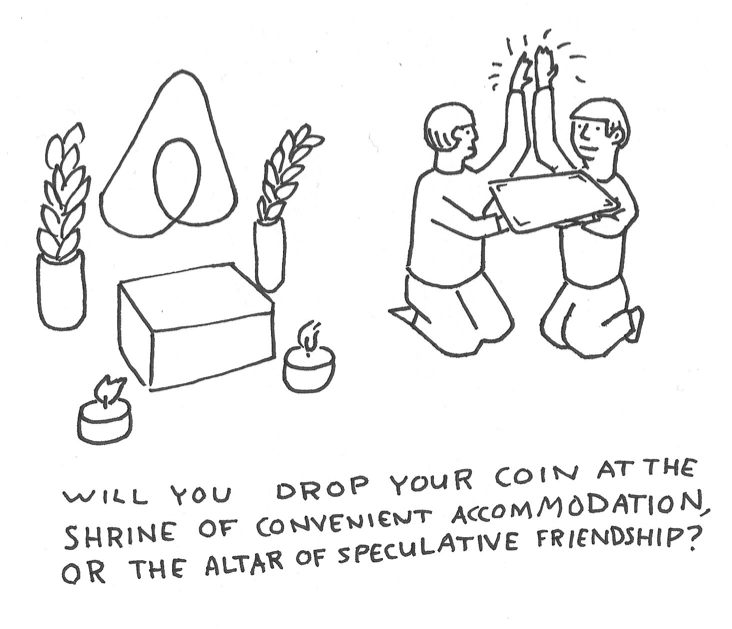 What are you looking for in this visit?

A gift or indulgence shared with someone you have reason to trust sounds like the absolute best arrangement for starting a relationship. In my case, the value of a place to stay in San Francisco is high, and Andy probably would have trusted my letter of recommendation enough to let me crash on his couch (identity is much easier to verify than it used to be, too, so you know the endorsement is a real one). Had I been coached to gift Andy some high-end pens or markers, we could have spent the evening making art together (as we have so often done since), and the whole endeavor might have been seen as an investment in that part of ourselves that likes art-making. Andy is not interested in becoming an AirBnB host, but he’s open to meeting someone his friend endorses, and pursuing a common interest (Andy has since become an accomplished comics artist). The cost of hosting a stranger would be high, because the only available space in his apartment is shared, and that sort of trust is difficult to establish. But to host a potential friend is lower, and whatever compensation is involved can be given as a gift. In the future, if I live in a place with a guest bedroom, I would like to try this experiment. In general, I am interested in pursuing more of my hobbies in more social ways, and this would be a great way to seed my social network to make that more feasible.

An investment in meeting new people is an investment in myself, and in pushing myself in the direction of something I want. If there are things I might like to do, I should explore these possibilities through deliberate efforts to expand my social network.

In general, as I mentioned before, people perform too few experiments. This is probably due to hyperbolic discounting and a failure to appreciate the size of the upside if you e.g. end up with a new close friend you see frequently. 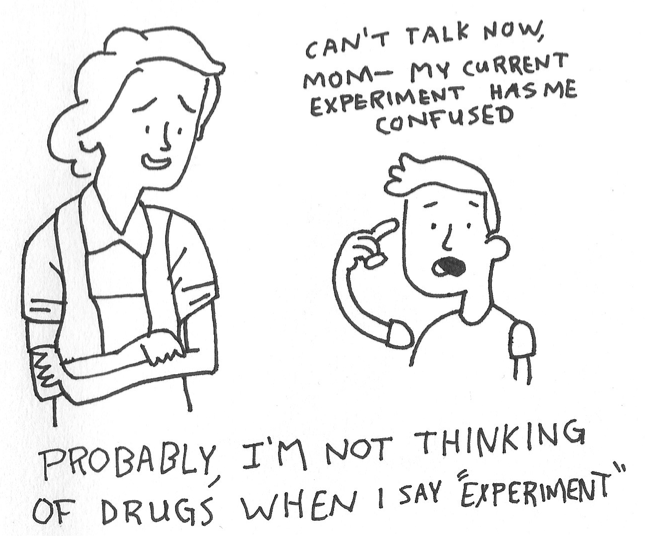 This is a request for introductions! I’m interested in meeting your most original-thinking friend (or maybe just someone you think would enjoy this sort of experiment). I’d like an introduction, and because we are going to meet virtually (for posterity, this is due to COVID-19), I’d like to record the conversation audio. I will use the recordings of these conversations to produce a summary of the experiment. Also, I promise not to take offense at the person you’ve chosen to introduce me to, even if I don’t like them.

If this experiment fails, and I don’t meet anyone interesting through it, I’ll have learned what doesn’t work when it comes to building networks. The likeliest scenario is that finding people that like each other is just hard. People like lots of different things, and it’s very hard to know if the things that each of them will like is one another.